Researchers have theoretically demonstrated the lowest rate of heat transfer, or thermal conductivity, in any silicon-based material developed so far. 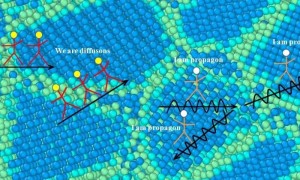 The researchers, Yanguang Zhou and Ming Hu at RWTH Aachen University in Germany, have published a paper on the polycrystalline silicon nanowire in a recent issue of Nano Letters.

The researchers expect that the new material could be especially useful for thermoelectric applications. By converting heat energy into electricity, thermoelectric materials provide a way to capture some of the waste heat emitted by vehicle tailpipes, power plants, and manufacturing facilities, and then convert the heat into useful energy.

“In this paper, we report a new structure, polycrystalline nanowire, which can reduce the thermal conductivity to a record low value, only one-third of its amorphous counterpart,” Zhou told Phys.org. “If we keep the electric conductivity and Seebeck coefficient as constants, which can be achieved by doping the material, the efficiency of the polycrystalline nanowire to convert heat to electricity can be enhanced by 277 times with respect to its bulk counterpart.”

The results here raise the question of what the lowest possible thermal conductivity may be for silicon nanowires of any form. In general, there are two kinds of vibrations that contribute to thermal conductivity: propagons and diffusons. The researchers expect that it should be possible to completely eliminate the contribution of propagons by incorporating disorder in the form of nanotwinned structures into the polycrystalline silicon nanowires to minimize their transport. Diffusons, on the other hand, are caused by the inherent structural disorder of a material, so they cannot be reduced in this way. Nevertheless, by eliminating the contribution of propagons, the researchers expect that the thermal conductivity of the polycrystalline silicon nanowires can be further reduced by 20%. The researchers plan to pursue this goal in future work.