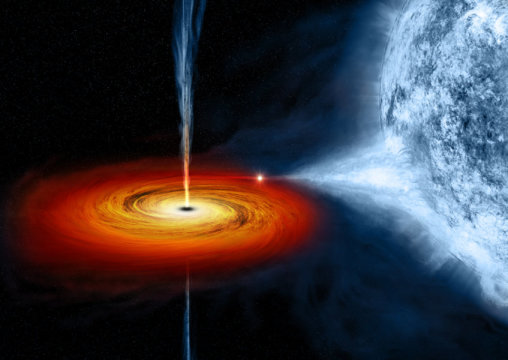 Using asteroseismology, an international research team including CEA, CNRS and the Université Grenoble-Alpes discovered a surprising alignment of the rotation axes of stars in open clusters, shedding light on the conditions in which stars are formed in our galaxy. Using data from Nasa’s Kepler mission, this result was obtained by studying a group of red giants in two old open clusters in the Milky Way. It was published on 13 March 2017 on the front page of Nature Astronomy.

By directly observing populations of aging stars, the researchers described the conditions which prevailed at the time the stars were formed in our galaxy. They more specifically determined the alignment of the rotation axes of the stars in two open clusters[1], calling into question the traditional star formation models. The results of this asteroseismological study are accompanied by 3D simulations of the collapse of pre-stellar clouds.

Most of the stars in the Milky Way were formed by the collapse of a giant gas cloud in areas obscured by gas and dust, which makes them hard to observe directly. This is why understanding the mechanisms regulating star formation is a major challenge for modern astrophysics. With this discovery published in Nature Astronomy, scientists are shedding new light on hitherto under-estimated processes which play an important role in star development and the formation of planets as well as, more generally, in the formation and development of our galaxy.

With the advent of high-precision space photometry, asteroseismology[2] has demonstrated its ability to probe the interior of stars and determine their fundamental parameters. The team analysed the light emitted by about fifty red giants[3] with a mass of between one and two solar masses. These stars, which are present in two old open clusters in the Milky Way (NGC 6791, eight billion years old, and NGC 6819, two billion years old), were continuously observed for four years by Nasa’s Kepler satellite and show distinctly observable oscillations similar to those of the Sun.

The thousands of oscillation modes present made it possible to precisely measure the orientation of the rotation axis of each star in the sample. The result was surprising, because for virtually all of the stars (about 70%) the rotation axes were closely aligned with each other and point to the same direction in the sky. As is pointed out by the first author Enrico Corsaro, an astrophysicist at CEA, “this was totally unexpected because the turbulence generated by the disordered movements of gas in the clusters should have led to randomly distributed axes.” Given the morphology of the star clusters and the considerable distances between the stars in an open cluster, the scientists concluded that this close alignment of the rotation axes could not be caused by tidal interactions and had to date back to the time the clusters were formed, billions of years ago.

Using 3D digital hydrodynamic simulations, the astrophysicists were able to reproduce various conditions which governed the formation of the stars. These simulations in particular vary the quantity of energy linked to the initial rotation of the proto-cluster[4] by comparison with that associated with turbulence. Using these simulations, they were able to determine that the axes of the stars align effectively when at least 50% of the total energy balance of the proto-clusters is associated with rotation. This shows that the rotation properties of the molecular cloud (in particular its overall angular velocity) were effectively transferred to the individual stars forming inside the cloud. Moreover, only stars with sufficiently high mass (at least 0.7 solar mass) can inherit these properties. Consequently, the less massive stars do not have this observed rotation axis alignment, because their formation process was to a large extent dominated by the turbulence which interfered with this angular motion. Rafael García, an astrophysicist at CEA, summarises: “we now have a new set of rules. Studying the deep core of distant red giants sheds light on the primordial conditions of star formation in the stellar clusters 8 billion years old, when the Universe was still very young.”

In the future, the observations that will be returned by the European Space Agency’s M3 Plato[5] mission will confirm and expand these analyses to numerous other star clusters in our galaxy.

[2] Asteroseismology studies the oscillations (called seismic motion) of stars, enabling their internal structure to be studied, because the structure and composition of stars vary as they evolve, with their vibration modes changing as they age. Asteroseismology thus enables a relatively precise estimate to be made of the age of the stars.

[3] A red giant is a star which has burned all the hydrogen present in its core.

[4] A proto-cluster is a gas cloud that is in the process of collapsing under the effect of gravity.

[5] This is the “Planetary Transits and Oscillations of stars” mission, scheduled for launch in 2024.