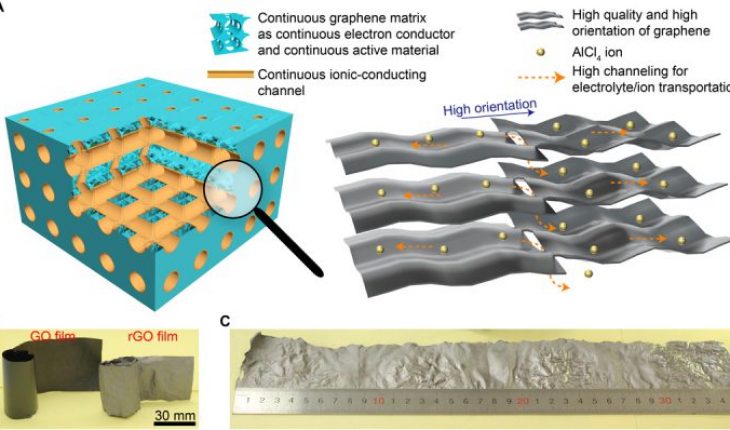 The battery, which has a positive pole made up of graphene thin film and a negative pole of aluminum, can retain 91 percent of its capacity even after 250,000 charge/discharge circles, a marked improvement compared with the lithium battery.

Rechargeable aluminum-ion batteries are promising in high-power density and solved critical challenges of limited lifetime, rate capability, and cathodic capacity. We design a “trihigh tricontinuous” (3H3C) graphene film cathode with features of high quality, orientation, and channeling for local structures (3H) and continuous electron-conducting matrix, ion-diffusion highway, and electroactive mass for the whole electrode (3C). Such a cathode retains high specific capacity of around 120 mAh g−1 at ultrahigh current density of 400 A g−1 (charged in 1.1 s) with 91.7% retention after 250,000 cycles, surpassing all the previous batteries in terms of rate capability and cycle life. The assembled aluminum-graphene battery works well within a wide temperature range of −40 to 120°C with remarkable flexibility bearing 10,000 times of folding, promising for all-climate wearable energy devices. This design opens an avenue for a future super-batteries.

If a smartphone used such a super battery, it would last up to 70 years without losing its capacity, even with 10 charges every day. In terms of charging time, the super battery, when used by a smartphone, could be charged in 5 seconds and used as long as two hours, the research team said.

“These figures must be read with some caution,”  noting that even testing 250,000 charge/discharge cycles would itself take a very long time. “The announced results are more likely the results of a simulated data model, rather than results from prototype testing,”

There is a long way ahead, with many obstacles to overcome before commercialization. They also said that the “super” battery is inferior to the lithium battery in terms of energy intensity.