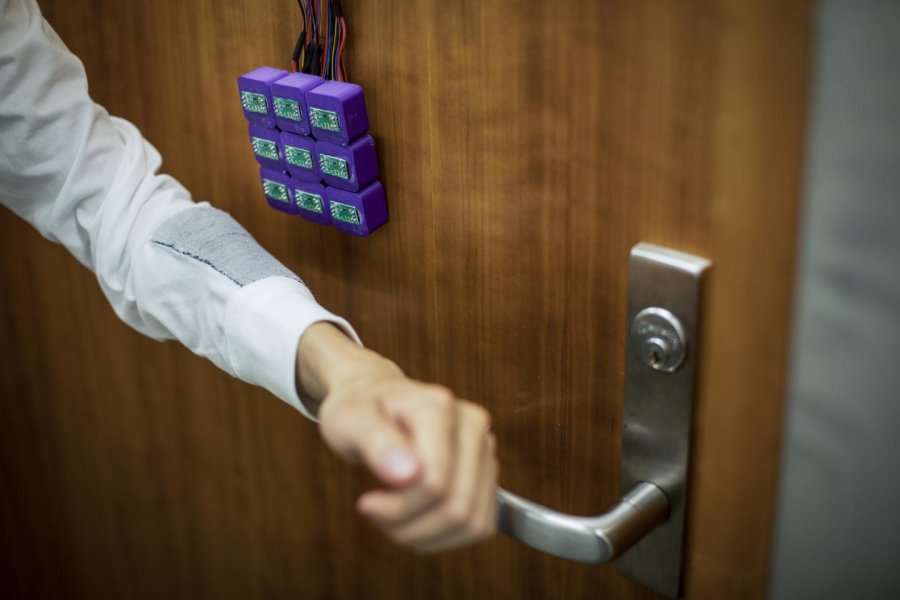 The UW computer scientists have created fabrics and fashion accessories that can store data — from security codes to identification tags — without needing any on-board electronics or sensors.

As described in a paper presented Oct. 25 at the Association for Computing Machinery’s User Interface Software and Technology Symposium (UIST 2017), they leveraged previously unexplored magnetic properties of off-the-shelf conductive thread. The data can be read using an instrument embedded in existing smartphones to enable navigation apps.

“This is a completely electronic-free design, which means you can iron the smart fabric or put it in the washer and dryer,” said senior author Shyam Gollakota, associate professor in the Paul G. Allen School of Computer Science & Engineering. “You can think of the fabric as a hard disk — you’re actually doing this data storage on the clothes you’re wearing.”

Most people today combine conductive thread — embroidery thread that can carry an electrical current — with other types of electronics to create outfits, stuffed animals or accessories that light up or communicate.

But the UW researchers realized that this off-the-shelf conductive thread also has magnetic properties that can be manipulated to store either digital data or visual information like letters or numbers. This data can be read by a magnetometer, an inexpensive instrument that measures the direction and strength of magnetic fields and is embedded in most smartphones.

“We are using something that already exists on a smartphone and uses almost no power, so the cost of reading this type of data is negligible,” said Gollakota. In one example, they stored the passcode to an electronic door lock on a patch of conductive fabric sewn to a shirt cuff. They unlocked the door by waving the cuff in front of an array of magnetometers.The UW researchers also created fashion accessories like a tie, belt, necklace and wristband and decoded the data by swiping a smartphone across them.

They used conventional sewing machines to embroider fabric with off-the-shelf conductive thread, whose magnetic poles start out in a random order. By rubbing a magnet against the fabric, the researchers were able to physically align the poles in either a positive or negative direction, which can correspond to the 1s and 0s in digital data.

Like hotel card keys, the strength of the magnetic signal weakens by about 30 percent over the course of a week, though the fabric can be re-magnetized and re-programmed multiple times. In other stress tests, the fabric patch retained its data even after machine washing, drying and ironing at temperatures of up to 320 degrees Fahrenheit.

This is in contrast to many smart garments today that still require on-board electronics or sensors to work. That can be problematic if you get caught in the rain or forget to detach those electronics before throwing them in the washing machine — a potential barrier to widespread adoption of other wearable technology designs.

The team also demonstrated that the magnetized fabric could be used to interact with a smartphone while it is in one’s pocket. Researchers developed a glove with conductive fabric sewn into its fingertips, which was used to gesture at the smartphone. Each gesture yields a different magnetic signal that can invoke specific actions like pausing or playing music.

“With this system, we can easily interact with smart devices without having to constantly take it out of our pockets,” said lead author Justin Chan, an Allen School doctoral student.

In the team’s tests, the phone was able to recognize six gestures — left flick, right flick, upward swipe, downward swipe, click and back click — with 90 percent accuracy. Future work is focused on developing custom textiles that generate stronger magnetic fields and are capable of storing a higher density of data.

The research was funded by the National Science Foundation, the Alfred P. Sloan Foundation and Google.

Materials provided by University of Washington. Original written by Jennifer Langston. Note: Content may be edited for style and length.