CeBIT is the largest and most internationally represented computer expo. The trade fair is held each year on the Hanover fairground, the world’s largest fairground, in Hanover, Germany. It is considered a barometer of current trends and a measure of the state of the art in information technology. It is organized by Deutsche Messe AG.

With an exhibition area of roughly 450,000 m² (5 million ft²) and a peak attendance of 850,000 visitors during the dot-com boom, it is larger both in area and attendance than its Asian counterpart COMPUTEX and its no-longer held American equivalent COMDEX. CeBIT is a German language acronym for Centrum für Büroautomation, Informationstechnologie und Telekommunikation, which translates as “Center for Office Automation, Information Technology and Telecommunication”.

CeBIT was traditionally the computing part of the Hanover Fair, a big industry trade show held every year. It was first established in 1970, with the opening of the Hanover fairground’s new Hall 1, then the largest exhibition hall in the world. However, in the 1980s the information technology and telecommunications part was straining the resources of the industry fair so much that it was given a separate trade show starting 1986, held four weeks earlier than the main Hanover Fair.

While by 2007 the CeBIT expo attendance had shrunk to around 200,000 from those all-time highs, attendance rebounded to 334,000 by 2010. The 2008 expo was marred by the police raids of 51 exhibitors for patent infringement. In 2009, the U.S. state of California became official Partner State of Germany’s IT and telecommunications industry association, BITKOM, and of CeBIT 2009. focusing on environmentally-friendly technologies. 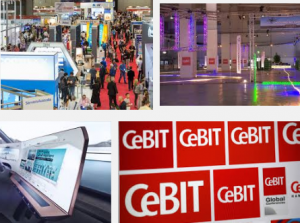