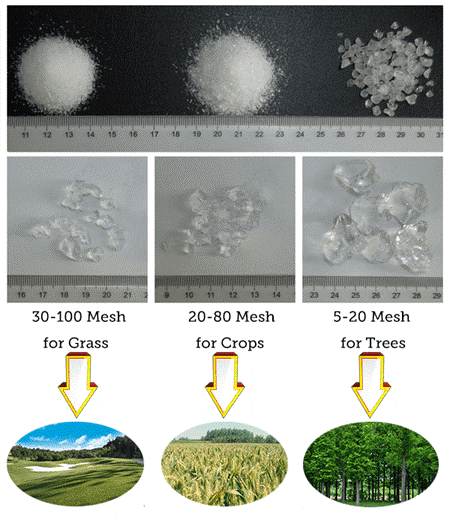 super absorbent polymers have a range of applications but are primarily used as a highly effective water retainers for soils and substrates in farming, agriculture and horticulture.

SAP is highly efficient polymer based water retainers that, when incorporated into a soil or a substrate will absorb and retain large quantities of water and nutrients. Unlike most products that become hydrated, it can easily release absorbed water and nutrients, thereby allowing crops to access the water and nutrients available at will, as a function of the absorption and release cycles.

The high performance polymer used in this product consists of a set of polymeric chains that are parallel to each other and regularly linked to each other by cross-linking agents, thus forming a network.

When water comes into contact with one of these polymeric chains, it is drawn into the molecule by osmosis.

Water rapidly migrates into the interior of the super absorbent polymer network where it is stored. As the soil or substrate dries out, the polymer then releases up to 95% of the absorbed water back into the soil.

Our  super absorbent polymers are highly effective when used in large scale farming and agricultural applications, especially at the time of germination and development of the root network due to good aeration of the soil.

The storage of rainwater or irrigation water delays the wilting point and thus makes it possible for certain plants to begin to be well established while waiting for the water regime to become adequate. it ensures a good population and an even growth of plants even in very permeable soils.

They are highly effective in the planting of trees, bushes, and saplings. It makes it possible to reduce the mortality rate of each crop due to transplanting shock and to enhance root development to accelerate growth and production.

Water retainers are simple to use throughout the growth cycle of lawns and sod. They ensure effective germination, faster root development, and regular and even growth of lawns. The rooting of sod is also accelerated.

Our product are widely used in landscaping for golf courses and grass in recreational parks and gardens.

They are is commonly used in hydroseeding to stabilise newly graded soils. Mixed with or without cellulose mulch, it makes it possible to maintain a minimum of surface water, which permits rapid sprouting of seedlings even in dry areas. The vegetation cover develops uniformly and rapidly over the whole treated surface. There are no dry spots without grass.

Additionally they also prevent cellulose mulch from becoming hardpan during a dry spell. The mulch remains aerated and allows the seeds to sprout quickly. It also make it possible to reduce the amount of mulch required.

When mixed into a substrate, they acts as a super absorbent water retainer to provide a reduction in water stress. It ensures that plant cuttings and transplants take root better and that seedlings grow faster.

Irrigation frequencies are also extended to save water. It is an ideal solution in substrates for containers, hanging plants, and house plants.

Watering frequencies are commonly reduced by 30% to 50%, which likewise reduces labour costs and the amount of water used.

To reduce leaching of nutrients added to agricultural soils, SAP may be mixed dry into fertiliser preparations.

The behaviour of plants fertilized with this mixture makes it possible to maintain or even increase
yield while at the same time protecting the environment from leaching. Manufacturers’ test results also show better root development of the plants.

Savings in the order of 15% to 30% are observed in the amount of fertilisers used.

They can be used for root dipping in order to prevent the desiccation of the roots of seedlings during transplanting or transport over a long distance.